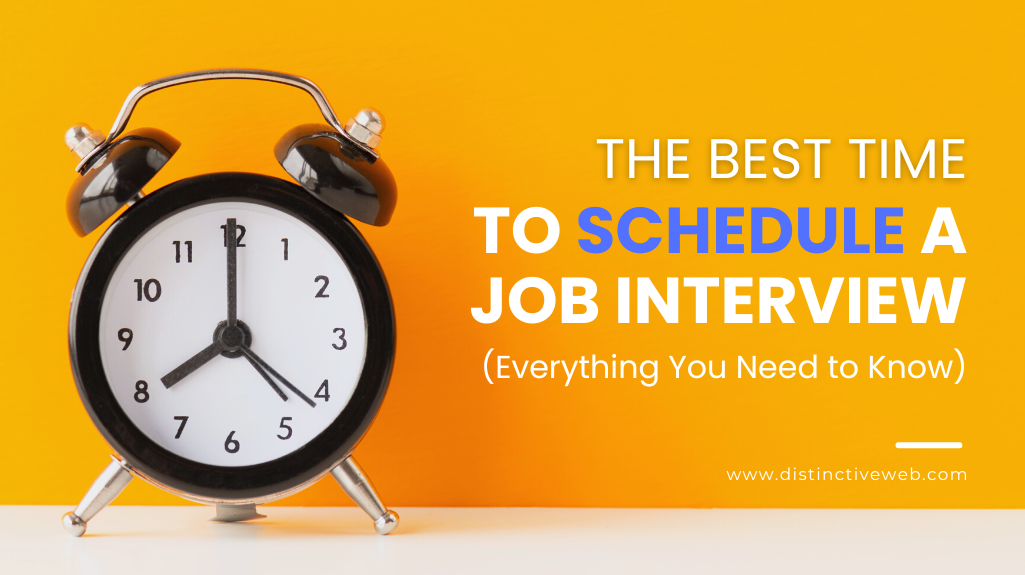 Woohoo! You got the interview!

But now you have a new question. The recruiter is on the phone and gives you an option of when to schedule your interview. How should you answer?

What is the best time to schedule a job interview?

Sure, you know the time and day that is most convenient for you. But your goal is to turn your interview into a job offer and get hired. Your most convenient time might not be best for achieving your ultimate goal.

Should you choose to be the first applicant to be interviewed? Or are you better off waiting until the end?

Should the job interview occur in the morning? Or is it best to schedule it for after lunch?

And if you’ve been asked to participate in an online job interview, should you meet with the interviewer in person instead?

Here are some advantages and disadvantages of being at the start of the line, at the end of the queue, or somewhere in between.

What Is The Best Spot In The Interview Schedule?

Naturally, an interviewer compares jobseekers against other applicants.

If you’re among the first of the applicants to be interviewed, the others are judged in comparison to you. This sounds like a good spot to be in — however, subconsciously, interviewers will compare you with others to find a better candidate than you.

This is called “contrast bias,” and it is a common occurrence in the interviewing and hiring process. The problem is that, instead of judging each individual on their own merit, they judge candidates in comparison to each other.

While this could work in your favor if you are clearly the best and most qualified candidate, but it can turn into a negative too. Even if you have the best qualifications and are the “perfect” person for the job, the interviewer may interview all the other candidates in the queue with the subconscious intention of finding someone “better than” you.

But you also don’t want your name to be the last one on the list of people to be interviewed — especially if you’re up against many competitive job seekers. While things might work out okay if your credentials are undeniably the strongest, but if not, you’ll have to work even harder to stand out.

Also, keep in mind that if the interviews are scheduled on the same day one after the other, it’s likely that the interviewer will be worn out by the end. As you can imagine, after multiple interviews, all the candidates start to look alike. So again, this means you would have to work all that much harder to stand out.

For these reasons, many career experts recommend that when given an option, it will be best to schedule your job interview in the early to middle of the interviews

This is especially significant when you are being interviewed as part of the screening process to narrow down a pool of applicants for more in-depth interviews. If you are too close to the end of the queue, the interviewer may have already said “yes” to some earlier candidates and may be mindful of not scheduling too many candidates for the next round of interviews.

For example, if you are told that interviews will be scheduled over the next several days, you’d be wise to choose a spot in the middle of those days, and if possible, closer to the beginning than the end.

What Time Of Day Is Best To Schedule A Job Interview?

In this case, you should avoid being the first person interviewed in the morning. If your interviewer is behind schedule getting to work, it could derail your interview.

You also don’t want to be last on their list for the day, as they may be impatient to wrap up the interview and rush the conversation or even end it prematurely. This could also happen if the interviewer has another candidate scheduled right behind you or some other task to complete. But you can at least minimize this potential problem by scheduling your interview in the middle.

If you are offered a range of times, give some thought to your personal preferences. For example, if you are a morning person, schedule the interview between 10-11 am. If you are at your best later in the day, choose a mid-afternoon time, such as between 2-3 pm. Just remember to avoid lunchtime. Just before lunch, one or both of you might be distracted by hunger and lunch plans. Just after lunch, many people feel sleepy, so this isn’t the best time either.

Is There A Day Of The Week That Is Best For Interviews?

Many experts advise that Tuesdays and Wednesdays are the best days to schedule interviews.

Monday can be a hectic and stressful day, and by Friday, many people “check out” in anticipation of the weekend after a busy week.

Is It Better To Conduct An Interview In Person Or Virtually?

According to the recent global trends report published by HireVue, more than a third of employers stated that they use a combination of face-to-face interviews and virtual interviews.

There are advantages and disadvantages to both types of interviews.

The following factors should be considered if given a choice:

Some Questions to Ask When Scheduling a Job Interview

Before selecting the time and date of the interview, it is acceptable to ask a few questions. Here are some to ask:

Of course, the ideal is that you get to interview right after a weaker candidate at a time of the day when both you and the interviewer have high energy levels, and you outshine everyone else. However, not everything is in your control. So, just do your best to choose the best time, date, and placement, and make the most of it. Good luck!