Get The Job Offer: 7 Action Steps To Take After The Job Interview 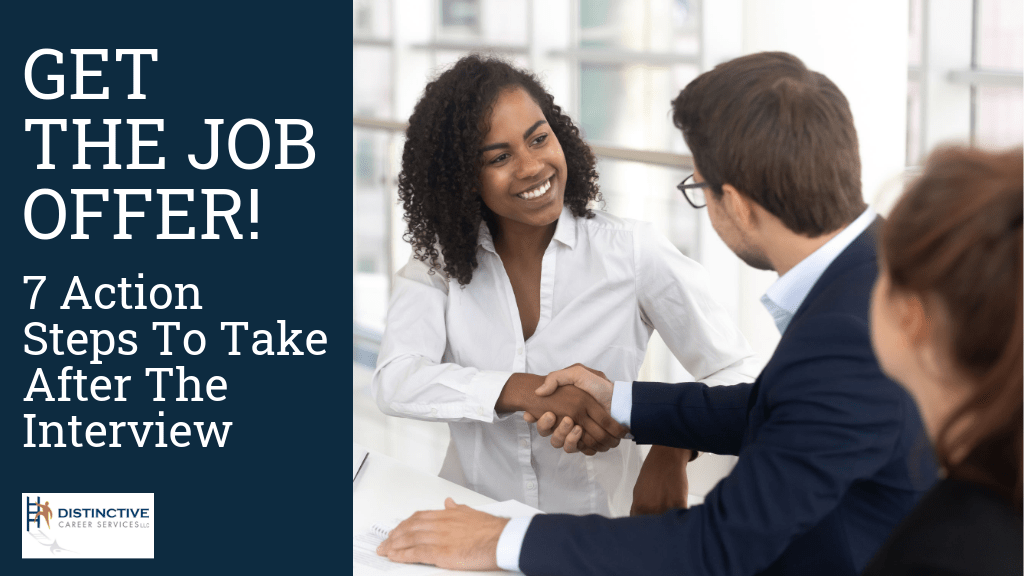 You did it!  You landed the interview for the job of your dreams!  Okay, maybe it “just a job”, but it was important enough for you to suit up and show up, right?  So you clearly have some interest in getting it. Now that the interview is over, what’s next?  You want to get that job offer! Do you follow up?  How soon?  And how?

In order to get the job offer, there are some important steps to take after the interview.  They may not all be necessarily what you expect, however.  The days of continual follow-up by telephone are over, especially since your call will more often than not go straight to voicemail.  And then there’s that whole “thank you note” thing, once asserted to be an essential component of any professional job search strategy.  Is that still the case?  Are handwritten notes or letters still recommended?  And, if not telephone calls, then what?

Before we get into the do’s and don’ts of interview follow-up, let’s take a brief look at the reality of today’s labor market and how it might impact your ability to get the job offer.  First, much depends on the unemployment rate.  If unemployment is high, job creation will be sluggish as employers remain leery and are often reticent to hire to full capacity.

Still, even when the economy is good and unemployment low, you are fooling yourself if you think you are the only qualified candidate who thinks this is the right time to move up on the professional ladder. Employers that are hiring are constantly reminded of how deep the available labor pool is.  There is, in other words, usually no shortage of talented applicants for the most coveted jobs.

Against this backdrop it is tempting to conclude that the most effective way to follow up on an interview is to be the most noticeable candidate, one who the interviewer would be foolish to ignore.  Maybe.  Then again, maybe not.

Why are we on the fence?  Because there are certain factors job applicants often forget, such as:

In light of these factors (among others), you should exercise some caution when demonstrating the level of interest you have in the position.  The line between being persistent and being a pest is a fine one.

Here, then, are some important action items for you to consider when following up on a job interview in order to get the job offer: